Buckley’s firmwide commitment to pro bono work is based on our core belief that all people are entitled to legal representation, and by performing this work, we are helping provide access to justice.

Buckley, a signatory to the Pro Bono Institute’s Law Firm Pro Bono Challenge, has committed to performing pro bono hours equal to three percent of our total billable hours annually. To make this commitment a reality, the firm has a dedicated pro bono partner and pro bono committee who endeavor to identify pro bono opportunities that not only make a difference in our community, but also match the interests of our lawyers and offer them the chance to enhance their legal skills.

Our pro bono efforts focus on providing legal services to economically disadvantaged individuals as well as to nonprofit organizations in our surrounding communities and throughout the United States. We partner with more than a dozen legal service organizations that provide pro bono support for a wide range of clients, including immigrants, children, veterans, senior citizens, and the needy as well as those caught up in the criminal justice system.

By offering such easy access to pro bono assignments and by providing one-for-one billable hour credit for every hour worked on pro bono matters, we have seen steady continual growth both in the number of hours and participating attorneys, since the firm’s inception.

Precedent-setting victory in veteran’s case Our client developed service-disqualifying conditions while on active duty in the Air Force, but was denied retirement pay and benefits, as the Air Force argued that his injuries did not develop in the line of duty. The firm filed a complaint on our client’s behalf before the Court of Federal Claims in May 2019, and in November 2019, after multiple extensions, the government filed a motion to stay the proceedings and to remand the matter to the Air Force Board for Correction of Military Records. In early March 2020, the court ordered a supplemental briefing and heard oral argument on the government’s motion for voluntary remand.

In June 2020, the court denied the government’s motion for remand. This is significant because, according to the National Veterans Legal Services Program (NVLSP), which referred the case to us, these types of matters are routinely remanded and never even get a hearing. This is an important victory for our client, as well as other servicemembers in his position. NVLSP was extremely pleased with the court’s decision and they have cited it in a number of other cases.

Children from Honduras receive legal permanent resident status After five long years, our lawyers won a significant victory in an immigration matter referred by Kids In Need of Defense (KIND). We represented two children from Honduras seeking legal permanent residency in the United States after being abandoned by their abusive father and facing kidnapping threats in their home country. Upon arrival in the U.S., our clients were immediately charged with unlawful entry and placed in removal proceedings.

Our team set to work on establishing their eligibility for Special Immigrant Juvenile Status as a defense to the removal proceedings and as a basis for obtaining legal permanent residency for them. In 2016, the team obtained an order in Maryland state court awarding sole custody of the children to their mother and terminating their father’s parental rights. With this order in hand, our team obtained approvals confirming that our clients were eligible for Special Immigrant Juvenile Status, but due to the large number of unaccompanied minors coming to the U.S. from Honduras, and changes to immigration policy and priorities following the change in administration, securing these visas and terminating the removal proceedings was a slow, uphill process.  Finally, our team was able to file a motion to dismiss the removal proceedings in immigration court, which was granted in 2020. With their removal proceedings terminated, our clients (one of whom just graduated high school) can obtain employment authorization documents and proceed with finalizing their legal permanent resident status.

Compassionate release granted for terminally ill client Buckley won a favorable decision from the Northern District of Florida granting the compassionate release of a terminally ill federal prisoner. Our client pled guilty in 1994 to nonviolent major drug trafficking offenses and received a life sentence. At the time we filed our motion, our client was 78 years old and had served 26 years. He was recently diagnosed with stage IV prostate cancer. In April 2020, the team submitted a compassionate release petition to his warden on the grounds of his terminal illness as well as his age, other medical conditions, and time served. The required 30 days passed without any response. At the beginning of May, we moved forward, filing an emergency motion with the Florida sentencing court. The government strenuously opposed our motion, but the court ruled in our favor. Our client was subsequently released to his family.

Our greatest reward is achieving success for our clients, but over the years, Buckley has been recognized for its pro bono contributions including: 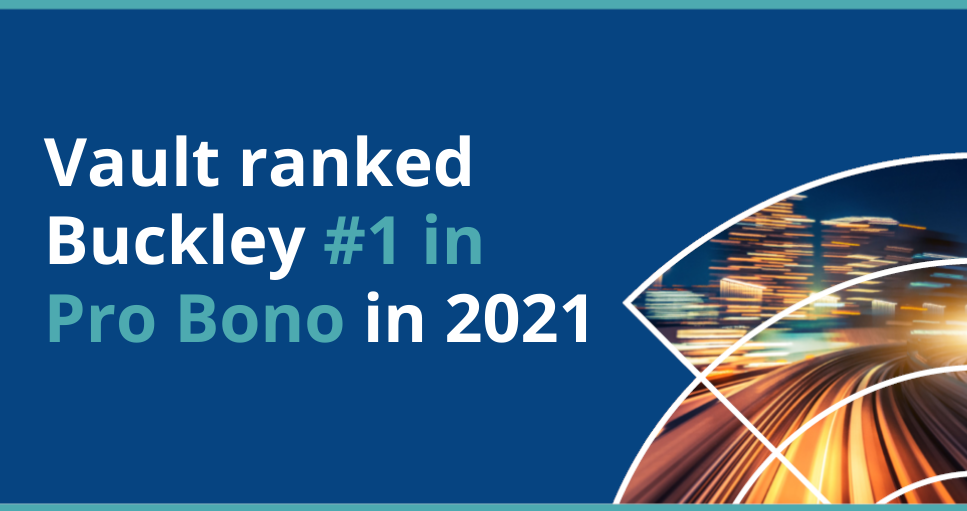